Napoleon Robinson saw a pitch get away and impact his first year; Played six seasons, made AAA

A Napoleon Robinson pitch got away from him in rookie ball in 1988 and struck the batter in the eye, The Salem Statesman Journal wrote.

"I think that set him back last year," Wallace told The Statesman Journal that July as Robinson pitched at short-season Salem. "He wasn't the same guy for about 1-1 1/2 months. ... He came back this spring and was throwing well."

Robinson did come back and he eventually threw well enough to make AAA by 1992. But, in a career that spanned six seasons, he never made the majors.

Robinson's career began in 1988, taken by the Dodgers in the 34th round of the draft out of Columbus State University in Georgia. Robinson was also credited as Nap Robinson and as Pokey Robinson.

Robinson started with the Dodgers in the rookie Gulf Coast League. Despite his issues with that pitch, he saw time in 24 games and ended with a 1.36 ERA and nine saves.

"There is no doubt he has been our most consistent starter," Greenville manager Chris Chambliss told The Greenville News after Robinson's 15th win late that August. "He's always throwing strikes. In games where he hasn't had good stuff, he'd still pitch a good game because all of his pitches go down and he doesn't let a walk and that kind of stuff beat him." 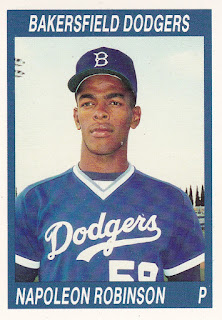