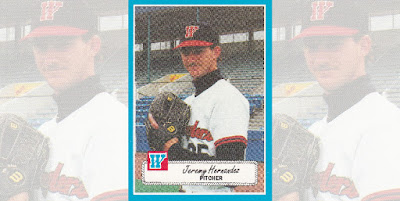 Originally published March 30, 2020
Jeremy Hernandez initially started games in the minors for the Padres. In spring 1991, though, Padre coaches had something else in mind for Hernandez: Relief, according to The Los Angeles Times.

"They said I seemed to be able to bounce back the day after I started, and that gave them the idea that I might be able to pitch day after day," Hernandez told The Times. "They told me that was the best way I could help the team, and the best way for me to get to the major leagues."

Hernandez took to his new role. He also made the majors. He spoke to The Times that September on the occasion of his first big league call up.

Hernandez went on from there to see time in 133 major league games over five seasons. He saw 70 of those appearances between the Padres and the Indians in 1993.

Hernandez' career began in 1987, taken by the Cardinals in the second round of the draft out of Cal State Northridge.

Hernandez started with the Cardinals at short-season Erie. He went 5-4 over 16 starts, with a 2.81 ERA. He moved to the Padres system for 1989 in a trade and made AA Wichita.

Hernandez debuted in San Diego that September and saw nine relief outings. He saved two, saw 14.1 innings of work and didn't give up an earned run.

Hernandez started 1992 with the big club, but a 6.39 ERA by late April led to a demotion. Hernandez told The Times then that he took it as an opportunity to do better.

"I didn't do quite as well as I'd hoped," Hernandez told The Times. "I'm kind of disappointed in myself. I may have thrown the ball well but the consistency wasn't there. Now I have to show 'em what I can do."

Hernandez returned by mid-May to see 26 total outings that year, then 21 to start 1993. He moved to the Indians in a June trade and finished out the year with 49 more outings, eight saves and a 3.14 ERA.

Another trade sent Hernandez to the Marlins for 1994. He saw 21 outings that year and nine saves. He returned for another seven outings in 1995 to end his big league career.

His career then ended with 24 outings at high-A Visalia in 1996 and two seasons in independent ball. 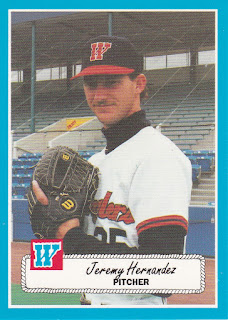