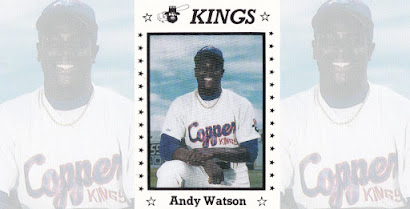 Andy Watson got drafted out of Vashon High School in St. Louis in June 1988, but the draft notification - for the 49th round - came with some encouragement, to go to college first, Watson's high school coach Ronald Newell told The St. Louis Post-Dispatch.
Watson chose college, Crowder Junior College, and Newell agreed with the choice, according to The Post-Dispatch.
"I think the year of college ball will be very good for Andy," Newell told The Post-Dispatch then. "Crowder has the type of program that can bring out the best in kids. He'll be able to play in a structured system and be on an extensive weight program."
Watson's college time paid off two years later, with a higher draft selection, but it didn't pay off with a long career. He played two seasons as a pro, all in rookie ball.
Watson's career began in 1990, taken by the Rangers in the 12th round of the draft out of Crowder. The Tigers had taken him in the 1988 draft, in the 49th round.
At Vashon, Watson showed his skills early. He won Post-Dispatch Athlete of the Week honors as a sophomore in 1986 by throwing a six-inning no-hitter.
"He's got a lot of smoke," Newell told The Post-Dispatch of Watson. "He has a real good fastball and a sharp-breaking curve. He also throws a slider."
After Crowder, Watson joined the Rangers. He played his first season between the rookie Gulf Coast League and rookie Butte. He saw four outings at Butte, where he gave up nine earned in 3.1 innings of work. He then saw 10 outings in the GCL, where he gave up 10 earned in 15.2 innings.
Watson returned to Butte for 1991, but saw a single game. He gave up one unearned run in 1.1 innings of work. He recorded all four of his outs on strikeouts, but then appeared to suffer a muscle injury, The Montana Standard wrote. Watson did not return. 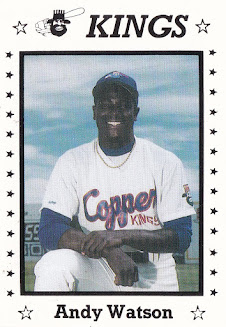