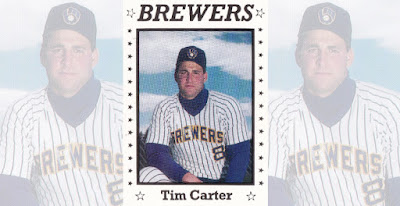 Tim Carter helped power his Helena Brewers to a 9-6 early-season win in 1990 and he did so by knocking in four, on a home run, single and sacrifice fly, The Helena Independent-Record wrote.

To The Independent-Record later, Carter spread around the accolades.

"The guys have to get on for me to get them in," Carter told The Independent-Record. "I was doing my job and they were doing their job."

Carter did his job that year in his first season as a pro. He went on to play in two more campaigns. He topped out at high-A.

Carter's career began that year in 1990, taken by the Brewers in the 14th round of the draft out of Miami University of Ohio.

Carter started with the Brewers at rookie Helena. The first baseman hit .279 over 63 games. He also hit 12 home runs and knocked in 58. He went 2 for 4 in a July game, knocking in a run on a single.

He moved to single-A Beloit for 1991. He hit .229 there over 113 games. He hit 15 home runs and had 64 RBI. One of his home runs came in an August game against Appleton, a grand slam, his fifth home run in seven games, The Appleton Post-Crescent wrote.

"That's probably as far as I've hit a ball," Carter told The Post-Crescent of the grand slam. "It was a breaking ball, and with two strikes, I was just trying to put the ball in play."

Carter moved to high-A Stockton for 1992. He got into 84 games there and hit .236, with six home runs. His season at Stockton proved his last as a pro. 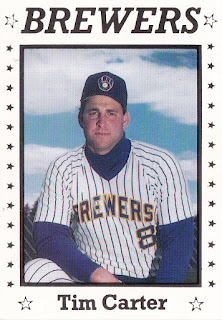