Eric Patton had himself a successful first pro season in 1989 in more ways than one.

He played well enough on the field to continue pitching the next year. Off the field, The Helena Independent-Record wrote, he got married.

"They got married down at the Colonial Inn," Helena team owner Ron Romaneski told The Independent-Record in a feature on Romaneski's ownership of the team. Romaneski and his daughter helped with the arrangements. "You don't count on doing those kind of things when you buy a baseball team."

Though his on-the-field work earned him another season, that second season proved the extent of his playing time. He played just those two campaigns, both at Helena. He didn't make it higher.

Patton's career began that year in 1989, taken by the Brewers in the ninth round of the draft out of Saddleback College in California. Patton was also credited as Eric Patten.

Patton started with the Brewers at Helena. He went 6-2 on the year, with a 2.98 ERA over 19 outings, one start. He also saved one.

His 1989 save came in early July, a two-inning effort against Idaho Falls. He went 5.2 in relief in an August game and gave up two earned. 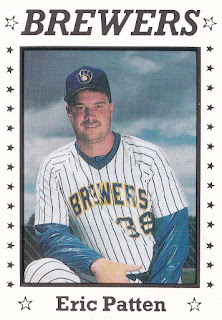