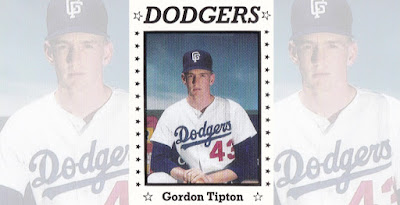 Tipton pitched eight innings, gave up four hits and struck out seven to help his team on to the title game, according to the site.

"I think the turning point was how Tipton performed after the second inning," Ward told reporters, according to the site. "He turned it around and completely dominated the game from that point. I think that lifted us more than anything. Gordie really responded."

Tipton soon found himself performing in the pros. He ultimately played three professional seasons. He topped out at high-A.

Tipton's career began that year in 1990, taken by the Dodgers in the 26th round of the draft out of Oklahoma State. Tipton was also credited by his formal name, Gordon Tipton.

Tipton started with the Dodgers at rookie Great Falls and he pitched well. He saw 24 games in relief, picked up six wins, seven saves and ended with a 1.50 ERA.

His performance on the year earned him the club's top pitching award (on a staff that included Pedro Martinez), according to The Great Falls Tribune.

"I never expected or planned to win any awards when I came here this summer," Tipton told The Tribune then. "I didn't set any numbers goals, just some mental goals."

Tipton moved to high-A Bakersfield for 1991. He got into 43 games in relief there and saved 14. He ended with a 3.13 ERA. He won player of the week honors in May as he won two and saved two.

He then returned to Bakersfield for 1992. He saw five outings, 8.2 innings, and gave up no earned runs. Those five outings, though, proved the last of his career. 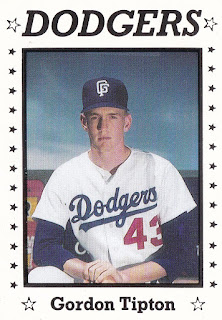