John Salles played it out and saw six pro seasons; He made AAA, but not the bigs

Playing in his sixth professional season in 1993, John Salles wondered if he should continue, he told The Orlando Sentinel.

He'd seen AAA the previous season, but was back at AA Orlando this season. He had yet to see the majors.

"In the back of my mind, all of us think, 'Should I quit?' " Salles told The Sentinel that August. "But you have to play it out. I've put my whole life into this since I was a kid. As long as I have a jersey, I still have a chance. I've got the rest of my life to work 9-to-5."

Salles did play it out, but that season proved to be his last. He never made he majors.

Salles' career began in 1988, taken by the Cubs in the fifth round of the draft out of Fresno State.

At Fresno State, Salles helped his team to 32 straight wins in 1988 and a spot in the College World Series.

"It's just a good batch of guys," Salles told The Los Angeles Times of the team's success that year.

Salles started with the Cubs at short-season Geneva. He saw one start that year and moved to single-A Peoria for 1989. He went 9-8 there, with a 2.48 ERA.

Salles then played 1990 at high-A Winston-Salem. He went 14-5 there over 25 starts, with a 2.58 ERA. In June, he overcame early struggles to throw a complete game in a 10-2 Winston-Salem win, according to The Newport News Daily Press.

"They gave me a big lead. Once they did, all I did was just throw strikes," Salles told The Daily Press. "But early on, I was all over the place. I was struggling." 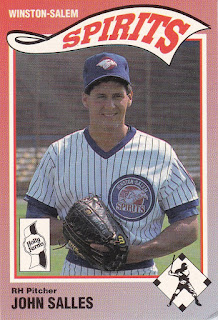