Originally published July 6, 2018
Alberto Castillo revealed his approach to the game in 1994 to The Binghamton Press and Sun-Bulletin.

He spoke to The Press and Sun-Bulletin in his eighth pro season - and his first at AA.

"I just try to work hard, try to improve and show I can play," Castillo told The Press and Sun-Bulletin. "You cannot be a tough guy. You have to be happy to everyone. If you're the kind of guy that comes to the clubhouse with an ugly face, no one wants to talk to you. You can't get mad."

Castillo had yet to make the majors, but his hard work eventually paid off. He made the bigs the next season and went on to a major league career that spanned 12 campaigns.

Castillo's career began in 1987, signed by the Mets as a free agent out of his native Dominican Republic.

He started with the Mets at rookie Kingsport. He made short-season Pittsfield in 1989. He then didn't hit AA until 1994. He finally made the majors the next year, 1995.

Going into 1997, Mets manager Bobby Valentine gave his impression of the backup catcher, whom Valentine managed the previous year at AAA.

"He has some special traits," Valentine told The New York Times. "He has physical tools that stand out, sure, like his throwing arm. He can shut down a running game. But he has a great amount of empathy for pitchers."

Castillo then started 1998 with the Mets and became an extra-inning hero on Opening Day by knocking a game-winning single in the 14th inning.

"Everybody thinks I can't hit, but I get hits," Castillo told The Times after that game.

Castillo got into 38 games for the Mets in 1998, then into a career high 93 for the Cardinals in 1999. He continued in the majors through 2005, playing for the Blue Jays, Yankees Giants, Royals and Athletics along the way.

He saw his final major league time in 2007, 11 final games with the Orioles. Castillo then kept playing in independent ball and in Mexico and the Dominican Republic into 2011, where he finally ended his career with Gigantes, of the Dominican Winter League. 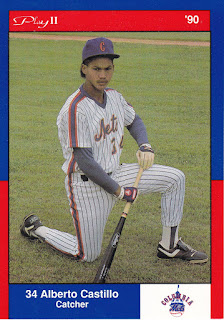