Brett Hendley liked to hit in college, hit over four minors seasons, topped out at high-A 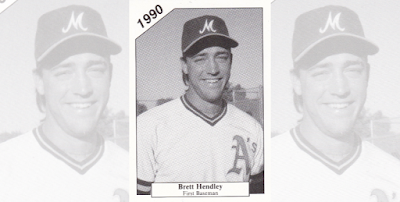 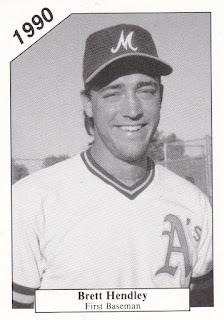 Brett Hendley felt he was best at hitting, he liked to do that best, he told Georgia Southern's student newspaper The George-Anne in May 1989.

And he hit at the school. He hit three home runs in three conference tournament games his freshman year. He also led the team as he spoke in RBIs and had a .289 average, The George-Anne wrote.

"At practice, mostly what I do is hit in the batting cage or do one of our batting drills," Hendley told The George-Anne. "I get pumped when I hit a home run."

Hendley went on from Georgia Southern to hit in the pros. His pro career, however, consisted of four seasons. He never got the chance to hit above high-A.

Hendley's career began that year in 1989, taken by the Athletics in the 14th round of the draft out of Georgia Southern.

Hendley entered the pros with baseball in the family. His father, Bob Hendley, played in seven major league seasons.

Hendley started with the Athletics in the rookie Arizona League. He hit .311 over 56 games that first year, with five home runs.

He moved to high-A Modesto for 1990. His average dropped to .184 there, over 67 games. He sacrificed a runner over in an April game.