Doug Cinnella threw two no-hitters - for his first two professional wins; He never made the bigs - 15 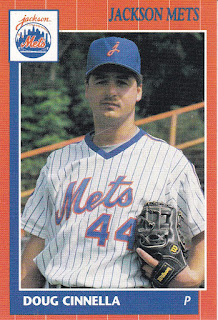 Doug Cinnella threw a change-up for short-season Newark in 1986 and he nearly gave up a hit. Instead, his defense preserved his no hitter.

Cinnella recalled years later to MiLB.com that, after that near-miss, he vowed to change his approach.

"I settled in after that. In the simplest terms, I was thinking, 'Let's not lose a no-hitter on your third-best pitch,'" Cinnella told MiLB.com. "So I just kept throwing my best stuff."

Cinnella managed to throw no-hitters for his first two professional wins for Newark. He is believed to be the only player to do that ever. In the history of baseball.

Despite his record-setting and no-hitting start, Cinnella never did make the majors. He played seven seasons, but topped out at AAA.

Cinnella's career began that year in 1986, taken by the Orioles in the fourth round of the draft out of Seton Hall.

At Seton Hall, Cinnella started all four years. He amassed 24 wins, 210 strikeouts and 11 complete games. In 2017, he made the school's Athletic Hall of Fame.

He started with the Orioles at Newark. He also started with those first two no-hitter wins. The rest of the year, though, he didn't win another. He ended 2-6, with a 2.78 ERA.

He then moved to the Expos system and single-A West Palm Beach for 1988 and 1989. In June 1988, The South Florida Sun-Sentinel wrote of Cinnella's efforts at improving his control.

"A lot of guys are into how hard you throw," Cinnella told The Sun-Sentinel. "I concentrate now a lot more than I did. Last year, when the game was over I'd go right to the radar gun."

He largely moved to relief with the Mets. He went 6-3 at Jackson, with two saves in 40 outings, eight starts.

Cinnella has since returned to New Jersey where he founded Professional Baseball Instruction in Ramsey.