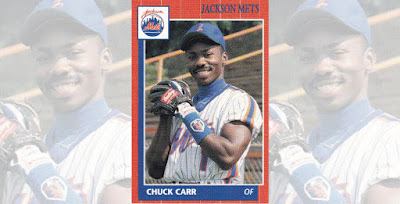 Chuck Carr had a big year in 1993. He stole 58 bases to lead the National League.

But he did it with the expansion Marlins, after the Mets let him go. Clint Hurdle, Carr's manager in 1990 at AA Jackson, later cited Carr's baseball skills - and his social skills - as among the reasons the Mets he was no longer a Met and had difficulty gelling with teammates in Miami.

"He's a free spirit, one with a high evaluation of himself," Hurdle told The Fort Lauderdale Sun-Sentinel in April 1994. "He has the ability to distance himself from others. No friends on the Marlins? I can't say I'm surprised because I don't know if it's No. 1 on his list of priorities."

Carr's 1993 stolen base total proved to be a career-best. He posted it in his fourth season with time in the bigs. He went on to play in four more and steal a total of 144 major league bases.

Carr's career began in 1986, taken by the Reds in the ninth round of the 1986 draft out of Fontana High School in California.

Carr started with the Reds in the rookie Gulf Coast League. He moved to the Mariners system for 1987 and played at short-season Bellingham.

Carr arrived in the Mets system for 1989 and played the year at AA Jackson. He then made his major league debut in April 1990. He got into four games, two at bats. He played the rest of the year between Jackson and AAA Tidewater.

He returned to the Mets for 12 games in 1991, then saw 22 with the Cardinals in 1992. He then went to the Marlins in the expansion draft and became a regular on that inaugural Florida team.

Early in the year, he showed his confidence by saying he was a "hot dog who could back it up," The Associated Press wrote in August.

"You have to have some kind of attitude to play this game," Carr told The AP. ″I learned that coming up through the minor leagues, trying to be Mr. Nice Guy and getting run over."

Carr finished the year with a .267 average, those 58 stolen bases and he finished fourth in the NL Rookie of the Year balloting.

He split 1997 between Milwaukee and Houston. He hit .248 between them and stole 17 bases to close out his big league career.

He played several more seasons in independent ball. He returned to the field in 1999 with independent Atlantic City, then Long Island in 2000. He played in Italy in 2002 and then closed out with the independent Arizona-Mexico League in 2003.

In 1999, with Atlantic City, Carr reflected on his major league career, according to Newsday.

"I don't regret anything," Carr said, according to Newsday. "I just thank God I was there." 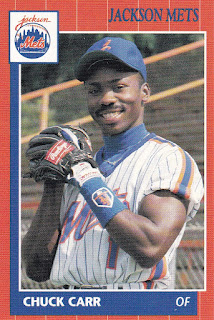