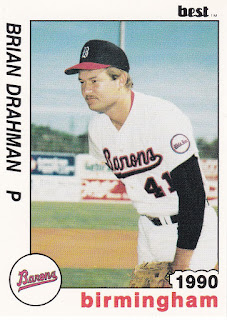 Going into spring training with the White Sox in 1991, Brian Drahman knew he had some work to do if he was going to make his goal of making the majors. He just needed to get hitters out, he told The South Florida Sun-Sentinel.

"They obviously think something of me or they wouldn't have protected me on the 40-man roster," Drahman told The Sun-Sentinel that February. "The opportunity is there and I'm ready to go. I also know my dad will be watching and that's important to me. This is really for him."

It was for his father because his father passed away seven years earlier from a heart attack. It was then that Drahman promised he'd make it to the majors.

"You wonder, if he'd been here, what it would've been like," Drahman told The Chicago Tribune after he got called up. "He might still be watching anyway, but you'd like to have him here."

Drahman's journey as a pro to that moment began in 1986, taken by the Brewers in the second round of the June secondary draft, out of Miami-Dade South Community College.

With the Brewers, Drahman started at rookie Helena, starting 10 games. For his second season, at single-A Beloit, Drahman moved to relief and closer duties, saving 18 games there.

The next spring, Drahman was again seeking a roster spot and he was hopeful, according to The Sun-Sentinel.

"I didn't have a stellar season," Drahman told The Sun-Sentinel of 1991, "but I did prove I can pitch at the major-league level and that was important."

Drahman did make Chicago in 1992, but he got into just five games. He played the rest of the year at AAA Vancouver, saving 30 games.

Drahman then went on to make the majors in each of the next two seasons, five games with the White Sox and nine games with the Marlins in 1994, rounding out his major league career.

Drahman continued playing in the minors through 1997, then is credited with returning for two seasons in independent ball and in Mexico in 2000 and 2001.

Drahman has since gone on to a career as a coach and manager in the minors and in independent ball. he has served as pitching coach the last five seasons at rookie Great Falls, continuing in 2013.