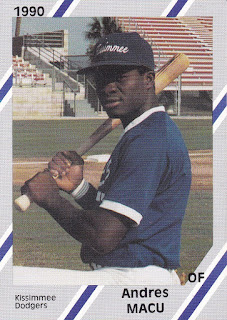 The Gulf Coast League Dodgers took the 1990 league title over West Palm Beach and the Expos and one of the players that helped them there was Andres Macu.

The Dodgers took the best-of-three series 2 games to 0. Macu helped get them there with a .274 average during the regular season.

Macu, though, couldn't help another team to a league title. He played just that single season as a pro. He never made it out of rookie ball.

Macu's career began in 1988, signed by the Dodgers as a free agent out of his native Puerto Rico. He played there at Liceo Puerto Rico High.