Donnie Carroll, What If - 5 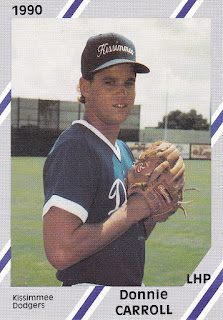 Donnie Carroll always had the "what-if" factor, he told The San Diego Union-Tribune in 2013.

The former Dodgers draft pick signed out of high school as a second-round pick, instead of going to college. He managed to play just four seasons as a pro. He never made AA.

"What if I had gone to Fullerton and had that experience. By signing out of high school, that was one of the experiences I never had the opportunity to do," Carroll told The Union-Tribune in a story about his college baseball-playing son. "For me to get to experience it through the eyes of my son, it’s special."

Donnie Carroll's playing career began in 1988, taken by the Dodgers the previous year 40th overall out of Granite Hills High School in California. Carroll was also credited as Don Carroll.

Carroll started with the Dodgers as an outfielder with rookie Great Falls. He scored on a wild pitch in a July game and picked up two singles and a double in another game that month. He hit .287 in 48 games overall.

Going into 1989, Carroll spent spring training in Dodgertown and roomed with future Hall of Famer Mike Piazza. Carroll garnered a mention in Piazza's book "Long Shot" as sneaking out after hours with another player while Piazza, too tired and "a nerd," stayed behind.

He then tried pitching. He moved to the mound for 1990 and played in the rookie Gulf Coast League, at Kissimmee. He went 2-1, with a 4.11 ERA over 18 outings, four starts.