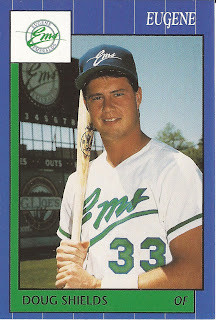 The short-season Eugene Emeralds started the 1990 season slow, but outfielder Doug Shields saw a way out: Through hitting, according to The Eugene Register-Guard.

He backed up his words by providing Eugene's only offense of the day, a two-run triple where he came around to score on an error, The Register-Guard wrote.

"But we're playing hard and hustling," Shields told The Register-Guard after noting his team's error problems, "and we could turn it around in one day, in one game, with one swing of the bat."

While Shields played hard himself, it didn't get him a long career. He played three seasons and made it as high as AA. He never made the majors.

Shields' career began in 1990, taken by the Royals in the 19th round of the draft out of Southern Illinois University.

Shields won all-conference honors at Southern Illinois, as well as Third-Team All-American honors. He also hit a home run to win a game in the conference tournament.

His efforts with the school won him induction into the school's Hall of Fame in 2003 and inclusion on the conference's All-Centennial Team in 2007.

In April 1987, Shields had some success and explained a new approach to The Carbondale Southern Illinoisan.

"I came up in the second game with a different attitude," Shields told The Southern Illinoisan. "Coach said to go out there and have fun. He said that's why I'm here, to have fun."

Shields started with the Royals in 1990 at Eugene. He got into 71 games and hit .192. In July, he earned some praise the opposing manager for his fielding, a nice threat-ending catch.