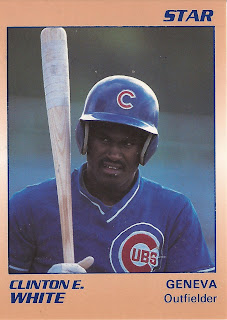 Clinton White was a multi-sport star coming out of high school and college in California.

In high school, he won awards in three different sports, according to a bio at a sports organization he helped found. In college, it was football that garnered the honors, earning All-League honors.

But it was baseball that White was eventually paid to play. And he would be paid to do that for just two seasons, never getting above short-season.

White's brief pro career began in 1989, taken by the Cubs in the 47th round of the draft, out of the College of the Desert.

It was at the College of the Desert that White won All-League and Honorable Mention All-State as a wide receiver, according to his bio.

With the Cubs, White started at rookie Wytheville, getting into 48 games. He hit four home runs, knocked in 22 and hit .263.

For 1990, White moved to short-season Geneva. With Geneva, he got into 35 games, hitting just .208 and knocking in 12. It was his last recorded time in the pros.

White has since returned home to Southern California, but stayed involved in sports. In 2010, he and three friends started the SoCal Athletic Academy in La Quinta. The academy's mission is to help young player prepare for playing in college.

White, who also goes by Kenny White, served in 2013 as the academy's director of operations.