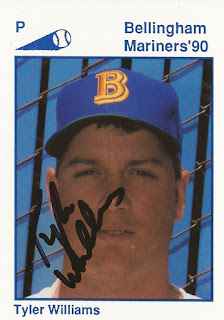 The University of Auburn-Montgomery advanced to the 1990 NAIA College World Series championship game and Tyler Williams sealed the win.

Williams went on from that performance to soon turn pro. His pro career, however was brief. He played a single season, 17 outings.

Williams' career began and ended that year, signed by the Mariners as an undrafted free agent out of Auburn-Montgomery.

Williams played his high school ball in Iowa at Davenport North. He's included on a long list of Iowans who became professional athletes.