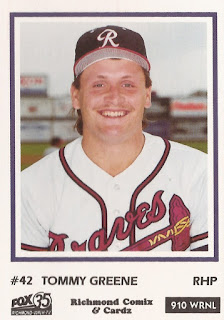 Tommy Greene had a rough first inning in that April 1992 game. But he bore down and, by the time he was done, gave up just two hits over seven innings, picking up the win.

Phillies manager Jim Fregosi later told The Philadelphia Inquirer it was a matter of the young right-hander going at hitters.

"Tommy's still a thrower," Fregosi told The Inquirer. "His best stuff is his hard fastball and slider. That's what he has to get hitters out with.

"But sometimes younger players want to be pitchers too soon," Frigosi added to the paper. "They throw to spots. He had to pitch through that."

Green was in his fourth season with time in the majors that year. The thrower, though, had already achieved the year before what most pitchers only dream of: a major league no-hitter.

Greene's career began in 1985, taken by the Braves in the first round of the draft, out of Whiteville High School in North Carolina.

He started at rookie Pulaski, hitting AA Greenville in 1987 then AAA Richmond in 1988.
By September 1989, he was in Atlanta. He started four games there, going 1-2 with a 4.10 ERA. His one win was a complete-game shutout and three-hitter.

"He's in a good spot," Braves pitching coach Bruce Dal Canton told The Wilmington Star-News afterward. "He was a No. 1 pick. He's showing he can pitch in the major leagues. He's definitely in the picture next year."

Greene returned for 15 outings in 1990, starting 9 of them. He pitched those games between the Braves and the Phillies, sent to Philadelphia to complete the Dale Murphy deal.

It was on May 23, 1991 that Greene threw his no-hitter, at Olympic Stadium on Montreal. It was his second start of the year. Greene ended the game himself, fielding a comebacker and flipping the ball to first.

"I think I really got into a groove around the third inning, but I actually felt pretty good all day," Greene told reporters afterward. "I realized about the sixth inning what was going on, but you can't really think about it. You have to just do your job."

Greene ended up going 13-7 for the Phillies in 1991 in 27 starts. But problems with his shoulder limited his 1992 season and his season two years later. In between, Greene went 16-4 with the Phillies in 1993, helping them to the World Series.

Greene's shoulder problems persisted. By April 1995, the hurler dubbed by The Inquirer a "country-hardballer," knew changes needed to be made for him to remain in the majors.

"What I got is what it is," Greene told The Inquirer after a poor spring outing. "I've just got to make some adjustments and go out there and pitch. If I go out there and throw strikes and get ahead of guys, which I didn't do today, I feel like I can make them swing the bat. I'm happy with that.

Greene, though, only got into 11 games that year, losing five and winning none. After spending a limited 1996 back in the minors, Greene returned to the majors in 1997 for two final outings with the Astros, ending his career.