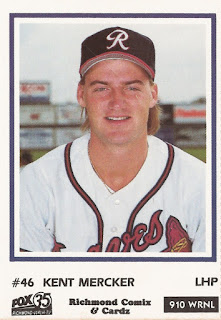 Just three months earlier, in May 2000, Kent Mercker suffered a severe headache on the mound. The headache, though, turned out to be something much more serious: a brain hemorrhage.

But, there Mercker was, on Aug. 22, picking up his first major league win after making his way back. Mercker, though, was just happy to be back.

"That's why this is so great," Mercker told The Los Angeles Times afterward. "Every time I go to the mound, it's a new lease on life for me. This could be my last game ever, you never know. I'm just going to go as hard as I can and not worry about anything."

In all, Mercker's was a career that spanned 23 seasons, serving as both a starter and a reliever. He also had a hand in two no-hitters, relieved in one, going the distance in the other.

Mercker's professional career began in 1986, taken by the Braves in the first round of the draft, out of Dublin High School in Ohio.

He played that first year in the Gulf Coast League, first hitting AA Greenville in 1988, then AAA Richmond in 1989. He also got a brief look at Atlanta that year, getting into two games as a September call-up.

Mercker was back in Atlanta by late June 1990, getting into 36 games in relief on the year, with a 3.17 ERA. He also picked up seven saves, along with four wins.

He picked up his first big league win with a two-inning relief appearance July 7. His first save came 10 days later, with a 1.2-inning performance where he gave up two earned runs.

In 1991, Mercker got into 50 games, four of them starts. One of those starts led to a no-hitter. On Sept. 11, Mercker went six innings of no-hit ball. Two relievers finished the job.

Three years later, Mercker finished the job. In April 1994, Mercker went nine innings for the win against the Dodgers, without giving up a hit.

"I kind of chuckled to myself: 'Here's a chance to put up or shut up,'" Mercker told The New York Times, thinking back to that first no-hitter. "And I put up tonight."

Mercker stayed with the Braves through the end of 1995, when he was traded to the Orioles. From there, he went to the Cardinals and then the Red Sox, before arriving with the Angels in 2000.

Then, on May 12, 2000, Mercker suffered the brain hemorrhage, a condition doctors called "very serious." But he came through, visiting his team by the end of the month and back pitching by August.

He also mounted his comeback shortly after being named in the Mitchell Report as a player who received Human Growth Hormone from Kirk Radomski. Mercker told The Hamilton Journal-News that he tried it once to help him return from injury. But he argued it didn't make him a better pitcher.

In that 2008 return, Mercker got into 15 games in relief, giving up five earned runs in 13.2 innings of work, finishing out his major league career.