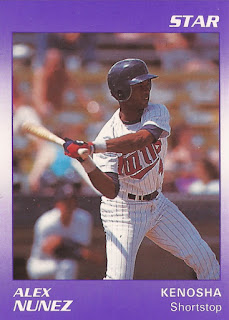 Alex Nunez didn't get a hit in this shortened August 1990 game, but neither could opposing Burlington, according to Malamut.net.

Nunez went 0 for 2 for single-A Kenosha that game. Other hits from his team gave Kenosha starter Tim Nedin enough to get his seven-inning no-hitter.

Nunez ended up playing in five seasons as a pro. Hits ended up being part of his problem, too few of them. His career batting average for those five seasons was .199.

Nunez' career began in 1988, signed by the Twins as a free agent out of his native Dominican Republic. Nunez is also known by his formal name, Alejandro Nunez.

For 1990, Nunez played at Kenosha. In 117 games, the shortstop hit .197. He also hit no home runs and committed 42 errors. His stat line was enough to make a Philadelphia Inquirer dubious list of futile 1990 efforts. He also stole another 20 bases.