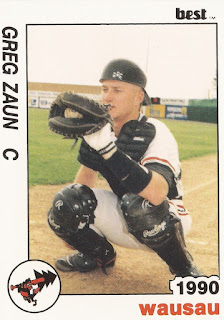 In his first year of pro ball in 1990, Gregg Zaun learned playing everyday was tougher than he thought it would be, he told The Los Angeles Times.

He also learned the little things about being a pro, the ones that he hoped would get him to the major leagues.

"People think you can give 100% all the time, but when you play everyday that's very difficult so you just try to do your best," Zaun, then a member of the rookie Bluefield Orioles, told The Times. "You have to hustle and sacrifice yourself and do the things necessary to win ballgames. You have to be a team player and that's the only thing I know how to do."

Zaun eventually became a team player in the majors over 16 seasons. The catcher made it there in 1995 with the Orioles and then saw time there each following year through 2010. He saw time in 90 or more games there six times and played on the 1997 World Champion Marlins.

Zaun's professional career began in 1989, taken by the Orioles in the 17th round of the draft out of St. Francis High School in Pasadena, Calif. Zaun is the nephew of Rick Dempsey. He is also sometimes credited as Greg Zaun.

Zaun first played in 1990 between single-A Wausau and rookie Bluefield. He made high-A Frederick in 1992, then AA Bowie and AAA Rochester in 1993.

He then made Baltimore for the first time in 1995. He got into 40 games there and hit .260. Going into 1996, Zaun looked for a regular role in the majors. The Orioles wanted to take a look, especially after improvements he made in his hitting, according to The Baltimore Sun.

"You wouldn't believe the progress that young man made," Orioles farm director Syd Thrift told The Sun. "You have to give him a lot of credit."

Zaun returned to the Orioles for 50 games that year before moving to the Marlins in a trade. He then got into 58 games for Florida in the club's title-winning run in 1997. He got two at bats in the World Series.

For 2004, he arrived with the Blue Jays. He later credited that move with revitalizing his career.

"I can't tell you how much I feel at home here," Zaun told The Associated Press in December 2006 after it became apparent he'd stay in Toronto longer. "This is where my career turned around. I was kind of spinning my wheels as a major league player for a long time."

He stayed in Toronto through 2008. He then played 2009 between Baltimore and Tampa Bay and finished out his career with 28 games with the Brewers in 2010 before shoulder surgery ended his year. After trying to come back for 2011, Zaun retired.

"I've got a World Series ring," Zaun told MLB.com that March. "I've had a great run. I feel really good about my decision. I'm really excited about the next step."

Zaun has since gone back to broadcasting and Toronto. The 2017 season will be Zaun's seventh as an analyst for Rogers Sportsnet.