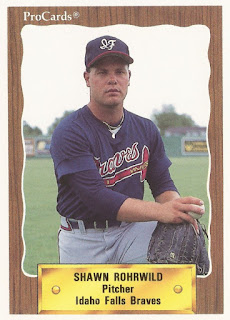 Shawn Rohrwild picked up a tough save in this June 1991 game for single-A Macon, according to The Savannah Morning News.

Rohrwild came on in the sixth inning of this seven-inning second-half of a double-header. The lead he had to hold? 1-0.

Rohrwild proceeded pitch the next two innings. He gave up one walk, no hits and no runs to pick up his seventh save of the year, The Morning News wrote.

Rohrwild's career began in 1990, signed by the Braves as an undrafted free agent out of San Jose City College in California.

At San Jose City College, Rohrwild scored on a wild pitch in a July 1986 game.

With the Braves, Rohrwild played his first season at rookie Idaho Falls. He got into 24 games in relief. He picked up one win, 10 saves and a 2.65 ERA.