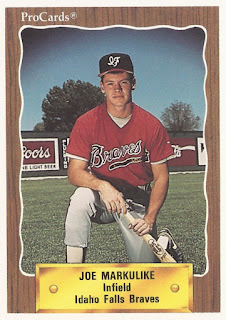 Joe Markulike helped Bucknell University to a lead in this March 1990 game, part of a busy day for the hitter, according to The Allentown Morning Call.

Markulike doubled and scored in the fifth. Overall, he picked up three the team's hits, The Call wrote.

Markulike used his college performances to earn a pro career. His pro career, however, turned out to be limited. He played a single season, seeing rookie ball and no higher level.

Markulike's career began and ended that year in 1990, signed by the Braves as a free agent out of Bucknell.

At Bucknell, he scored five runs in an April 1988 game. By mid-April 1990, Markulike had a .446 batting average, on his way to a team-best .454 season average. He also won academic all-american honors three times.