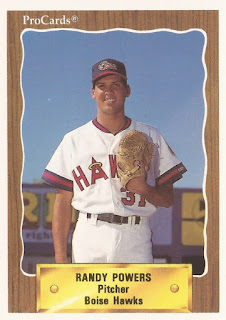 Randy Powers went into this February 1990 game for the University of Southern California with a poor record - 0-6 - against rival Stanford, according to The Stanford Daily.

"That was probably one of the biggest games I've ever pitched," Powers told The Daily afterward. "I proved something to myself."

Powers proved something to himself and soon proved it to others. He went on that year to earn All-American status - and turn pro. His pro career, however, ended up being limited to three seasons. He never saw AA.

Powers' pro career began that year, taken by the Angels in the seventh round of the draft out of USC.

Powers played at USC from 1987 to 1990, but his college career almost got derailed mid-way through in an off-season construction accident in 1988. He nearly lost part of a finger. Only a lengthy surgery saved the whole digit - the ring finger on his throwing hand, The Los Angeles Times wrote.

The only thing holding (the finger) on was the nerve, which stretched more than an inch," Powers told The Times. "It was more numb than anything else. I didn't think about losing the finger until a doctor said that was a possibility."

But he returned and he pitched well enough to find a longtime home in the school's record books. He went 11-3 in 1990, posting a 2.29 ERA. His career 38 wins still ranks tied for third all-time. He's second in innings pitched and seventh in strikeouts. He threw 12 complete games, eight of those in 1990.

Powers started with the Angels at short-season Boise. He started 15 games there, going 7-3, with a 2.56 ERA. He also helped his team to the playoffs. Going into the playoffs, Powers gave his team's outlook to The Spokane Spokesman-Review.

"We're not concerned," Powers told The Spokesman-Review. "We're relaxed and ready to go. This is a totally different season."