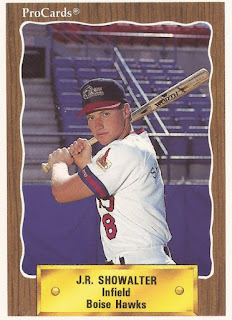 J.R. Showalter's University of Georgia Bulldogs made the College World Series in 1990 and he couldn't have been more excited, he told his hometown Sarasota Herald-Tribune.

"It's a dream come true," Showalter told The Herald-Tribune. "Out of high school, you get a scholarship to play baseball and you're like, great. Maybe we'll go somewhere. And three years later to have the chance to play in the College World Series is a dream come true. It's great."

Showalter's professional career began that year in 1990, taken by the Angels in the 10th round of the draft out of Georgia.

On his way to the 1982 Little League World Series, Showalter struck out 12 in a June game. His team then took seventh place in Williamsport.

He then eventually made his way to Georgia. In that College World Series season, he hit .341 with 14 home runs and 74 RBI. Georgia went on to win the title that year, Showalter hitting .304 in Omaha.

With the Angels, Showalter started at short-season Boise. In 58 games, he hit .267. He hit two home runs in a late-August game, two of the eight he hit on the year. He doubled and scored in a playoff game.