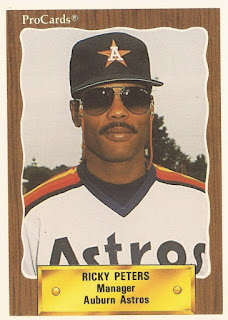 Rick Peters found a regular spot in the Tigers lineup in 1980 after injury and he took advantage, according to The Associated Press.

In one late-June game, Peters went 4 for 5, with three runs scored.

"This is a kids' dream," Peters told The AP early that July. "The older guys on the team helped me keep my spirits up when I wasn't playing, now they're keeping me steady when I am playing."

Peters went on to live that dream in five major league seasons. After his career ended, he had a brief career trying to get others to realize that dream, too.

Peters' career in baseball began in 1977, taken by the Tigers in the seventh round of the draft out of Arizona State University. He's referred to as Ricky Peters on his ProCards card.

Peters made a quick ascent to the majors. He played 1977 at AA Montgomery, then 1978 at AAA Evansville. He returned to Evansville for 1979, hitting .320. That September, Peters debuted in Detroit.

Peters got into 12 games for the Tigers that year, picking up five hits in 19 at bats. He also knocked in two runs.

Going into 1981, the Tigers had Peters penciled in for center field. Peters just focused on playing, according to The AP.

"I have a job now, I have a fresh start," Peters told The AP that March. "This is how I wanted 1980 to start out, with all the hopes and with all the goals and things."