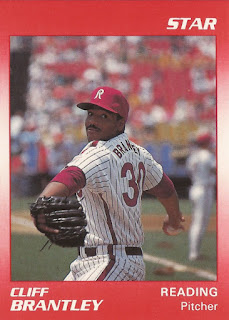 His manager Jim Fregosi, though, was understanding after that September 1991 contest, according to The Allentown Morning Call.

"Brantley threw the ball well, but he was just nervous," Fregosi told The Morning Call. "Heck, that's a natural thing. Everyone gets like that when they play their first game in the big leagues."

Brantley improved over his next few outings, ending that six-outing stint for the Phillies at 2-2. He then came back in 1992 for another 28 appearances with the club, but his final major league game came sooner than he'd hoped. It came just over a year after his debut.

Brantley's career began in 1986, taken by the Phillies in the second round of the draft out of Port Richmond High School on Staten Island.

Brantley played his first year at short-season Utica, going 3-5 in 11 starts. He moved to single-A Spartanburg for 1987, then single-A Clearwater in 1988.

His first extended time at AA Reading came in 1989. He made AAA Scranton in 1991. Then, in September, he got his call up to Philadelphia.

Brantley got into six games that September, starting five. His first win came in his third start, against the Cardinals.

"I was trying to mix my pitches," Brantley told reporters after that win. "That's a big part of pitching in the big leagues."

Sent down in mid-June, Brantley made it a point to ensure he returned, he told The Morning Call.

"I was determined to get back," Brantley told The Morning Call. "I went down with a positive attitude and got my work in. I'm ready to contribute."

Brantley played one more season at AAA for the Phillies and Expos, ending his career.