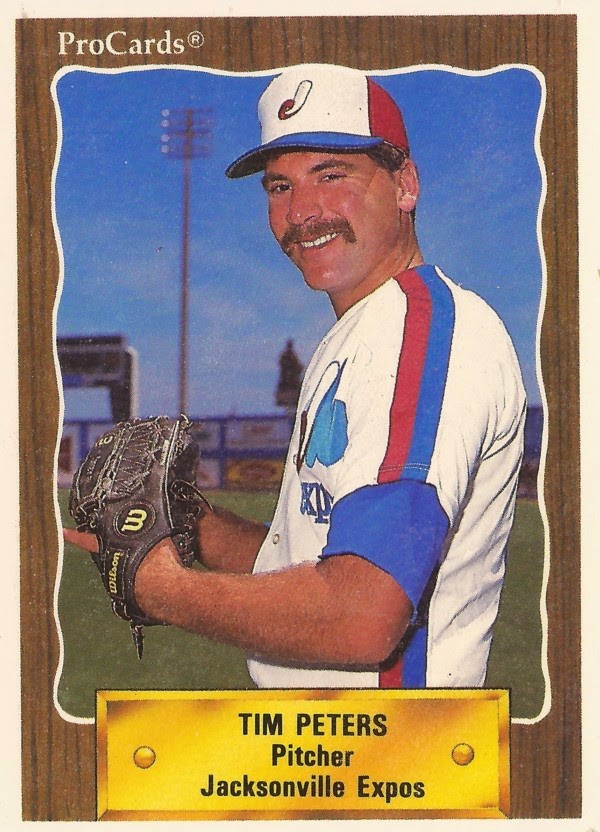 Tim Peters came in for the ninth inning and pitched well. He struck out one and didn't give up a hit.

His opponents on this day in August 1988 were none other than the Montreal Expos. Peters was pitching in an exhibition game between the Expos' AAA team the Indianapolis Indians and the big club.

For Peters, that game ended up being the only time he'd face major league hitters in the regular season. It also ended up being his only time at AAA. Peters played just four seasons as a pro, never making it above AA.

Peters' career began in 1987, signed by independent Salt Lake City out of the College of Southern Idaho and Arkansas.

With Southern Idaho, Peters went 9-3 in 1984, helping his team to the junior college national championship. Peters spent the summer of 1985 with the Nevada Griffons, a collegiate league team.

He then moved to the University of Arkansas, where helped his team to the 1987 College World Series.

Out of Arkansas, Peters signed with independent Salt Lake. In 38 relief appearances, he picked up nine wins, 11 saves and an ERA of 2.10. He picked up one of those saves in a June game. He also pitched in both ends of an August double header.

Along the way, he helped Salt Lake City to a 29-game winning streak and he made the league All-Star team.

Peters' work with Salt Lake caught the eye of the Expos, who signed him for 1988. He played that season between single-A Rockford and AA Jacksonville. He also pitched more than well.

In 42 appearances at Rockford, Peters turned in an ERA of just 0.61. He didn't do much worse at Jacksonville, where he had a 1.27 ERA over 17 outings.

Peters returned to Jacksonville for 1989, but he couldn't replicate his performance of the previous year. In 40 relief outings, he ended with an ERA of 4.44.

In 1990, Peters got just two outings at Jacksonville before moving to the Indians and high-A Kinston. It was his final year as a pro.

Peters later became a coach in college. He served as assistant coach at Texarkana College and the University of Houston, then as an assistant coach with Collin County Community College in Texas, according to the Arkansas fan site HogNation.net.
1990 CMC-Pro Cards Tally
Players/Coaches Featured:1,596
Made the Majors: 782 - 49.0%
Never Made Majors: 814-51.0%-X
5+ Seasons in the Majors: 342
10+ Seasons in the Minors: 199
Posted by Steve78 at 9:00 PM