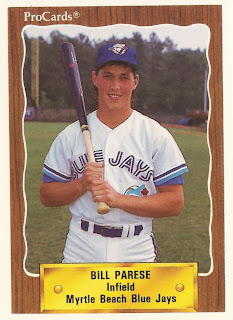 Going into his third professional season, Billy Parese was looking to improve his batting average, he told his hometown newspaper The Oklahoman.

With his previous, year, spent largely at short-season St. Catharines, there was a lot of room for improvement.

"The thing that got me down last year was I hit the ball hard, put it in play and still only hit .180," Parese told The Oklahoman. "I only had one bloop hit all season. That's unbelievable."

Parese did improve his average that year in 1990, he improved it to .237, hitting at single-A Myrtle Beach. Parese, though, couldn't improve it further. He played just one more season, never making it to AA.

Parese's pro career began in 1988, taken by the Blue Jays in the fifth round, out of Owasso High School in Oklahoma. Parese is also credited as B.J. Parese.

Parese grew up in Oklahoma, the son of pro baseball scout Bill Parese. The elder Parese played baseball at the University of Oklahoma, getting time in rookie ball with the Yankees. The father went on to be a scout with the Giants, passing away Christmas Day 1989.

The younger Parese hit the field for the Blue Jays in 1988, playing between rookie Medicine Hat and single-A Dunedin. Over 52 games, he hit .200. In one July game for Medicine Hat, Parese picked up three hits.