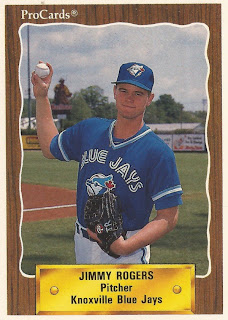 Sometimes mistakes are obvious, especially to the person who makes them. That's what happened to Jimmy Rogers, pitching in the top of the 10th inning in September 1995, throwing to the Tigers' Travis Fryman.

"It was a slider that I hung over the plate," Rogers told The Associated Press afterward. "I knew from the moment it left my hand (a home run) was going to happen."

Rogers began his professional career in 1986, taken by the Blue Jays in the 16th round of the draft. Rogers, though, didn't sign right away. Instead, he chose to stay at Seminole Junior College and play another year, according to The Oklahoman.

As the Oklahoma-native stayed in college, Rogers told The Oklahoman in June 1987, Toronto kept watch.

"They had someone at every game I pitched this year," Rogers told The Oklahoman. "I guess it was a gamble to stay in school another year, but I needed to work on my control and some other things. I really didn't start pitching full-time until last year so I wasn't ready."

With the Blue Jays, Rogers started at short-season St. Catharines going 2-4 with a 3.36 ERA in 12 starts.

He hit single-A Myrtle Beach for 1988, going 18-4 with a 3.35 ERA. He also made the South Atlantic League All-Star Team that year. It was enough to earn him a promotion to AA Knoxville for 1989.